This "Stars in a Time Warp" QAL with Barbara Brackman gets more interesting each week!  Stars below represent quercitron (yellow), drab (no reds/purples), arborescent and Indigo.  Had to really dig for some, such as "drab"....did not have much of that, as well as arborescent's gnarly branches!

Working on making Flying Geese for the final border of my "Colonial Medallion"......need 84 I think......21 per side.  Below are some completed geese....counted them after I laid them out and found 21!  So I guess one border is ready! 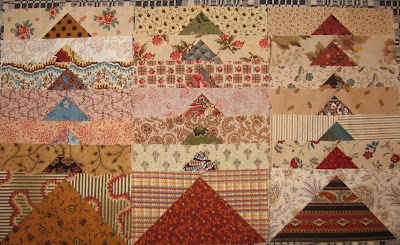 And a second border! 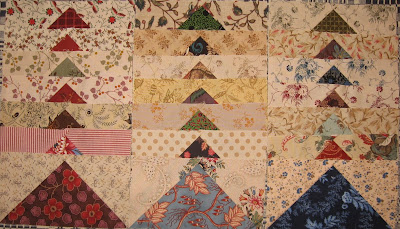 But I never know when to stop in my quest to use each fabric only once!  The two photos below represent enough for the last two borders and that's not all....I do have a few more "Favorites" that I need to cut and then start pairing the dark geese with a light background. 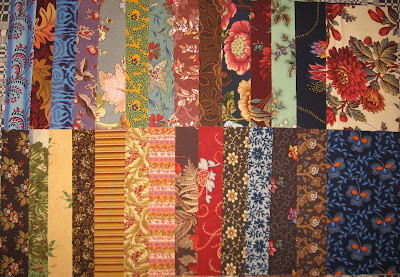 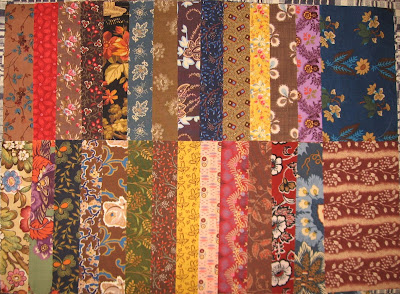 As I've said before, I am using what I call the Rectangle/Square method of making flying geese.....two reasons.....no need to square up AND adding a second line of stitching 1/2" away from the first and then cutting between them creates  2 loverly half-square triangles from each "goose" for use in a future project!  Always trying to think ahead!  This is one of the shoeboxes of hst's................. 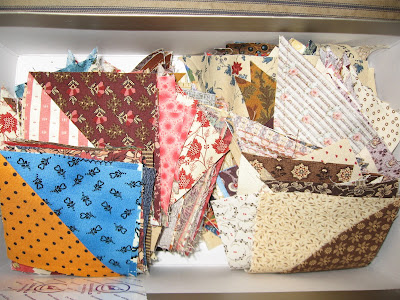 The latest completed Jane Stickle block....A6, I think...LONG WAY to go!!
My block is a tad larger than the 5" but I will cope with that somehow.....really don't wan't to make another!  Used the same great madder stripe that I used in my first A6 block back in 1998(the one with the muslin that I feared would not hold up over time).  Isn't it a great reproduction?  From Judie Rothermel back in the 1990's before manufacturers added designers' names to the selvage! 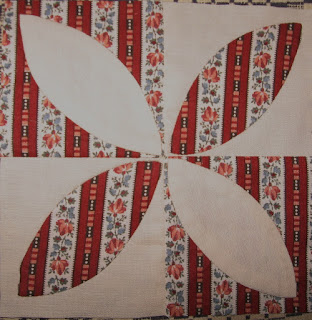 Maine Quilts 2015 was last weekend and here are a few high of the highlights for me.....this is Mary Reynolds' "Mountmellick" mystery quilt with Di Ford.  Love her colors! 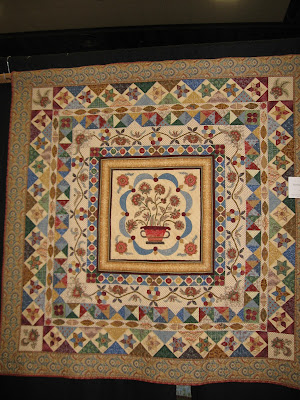 You know that big quilts with small (tiny) pieces are always topnotch in my book...love this one that contains 8000+ pieces. 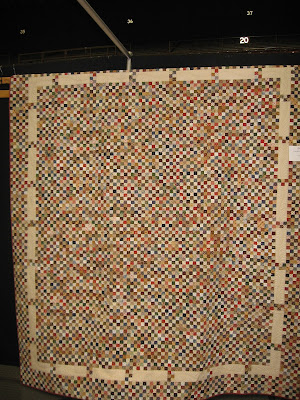 The machine-quilted feathers are beautifully quilted by the maker, Diane Dixon. 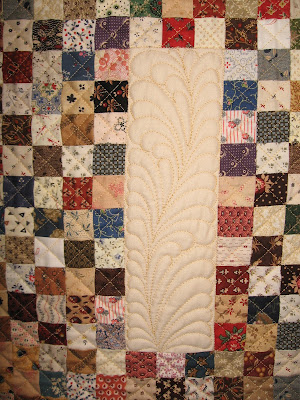 This is the version of the Jane Stickle quilt that my friend Wendy completed in nine months!  She did it in her potholder-style and it is absolutely gorgeous! 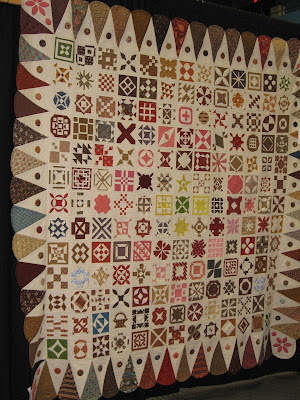 Here we have the Edyta Sitar (with permission!) quilt that Backroads Quilters will raffle at their show in October 2015 in West Gardiner, Maine.  The group works very hard to produce an excellent quilt that will go to a very lucky winner!! 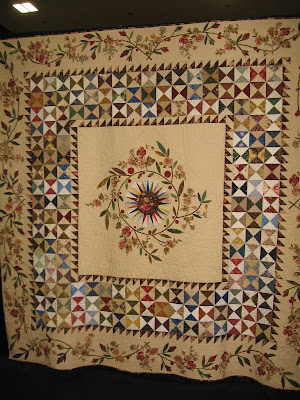 This is a Jo Morton club project that Karen Legendre chose to make in many Blues!! 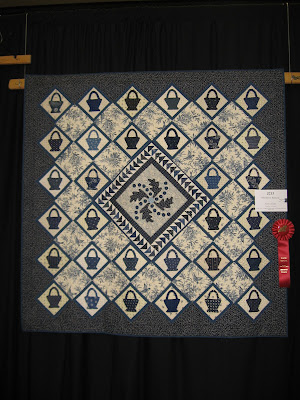 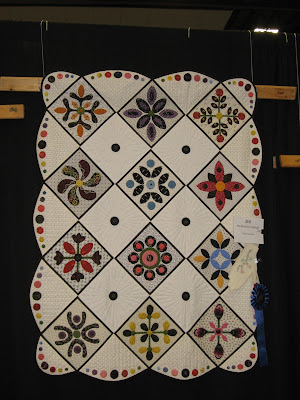 This quilt hanging beside Wendy's naturally caught my eye....very nice Small Applique.....sorry I do not remember the maker's name....will try to find out. 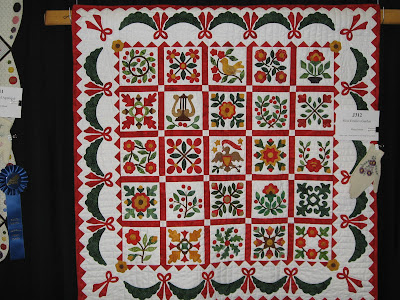 And now we have the Antiques from the Maine State Museum collection, curated by Laurie LaBar.  MSM has a collection of about 130 quilts and 80% of them have the cut-out-corners for a 4-poster bed!!  In this exhibit of six quilts, 5 had the cut-outs! 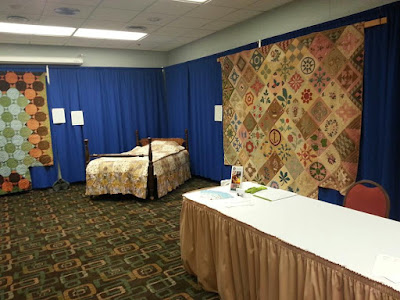 This early 19th century quilt made with the popular-at-the-time flounce.  In excellent condition as it likely was a "best" quilt. 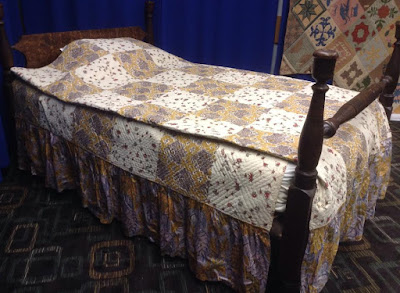 The blocks are just two fabrics repeated........but What Fabrics!!  The one on the right is a woodblock that is said to have been used in a 1750 wedding dress.  Hope I have the info right..........forgot to take a photo of the info card. 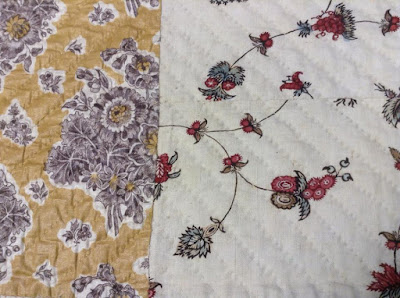 Would you ever have believed this vivid Yellow from then? 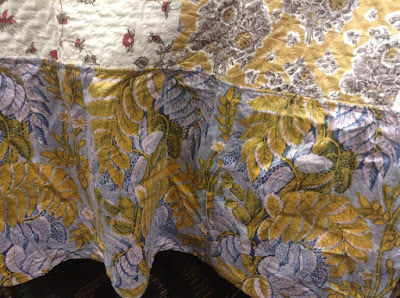 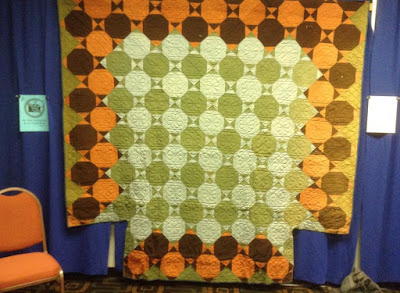 This Friendship quilt is the so-called "Bark Messenger".....see ship in middle block, which may have been a metaphor as several ships with that name exist but none from the time period of 1850.  This quilt made in Potholder-style. 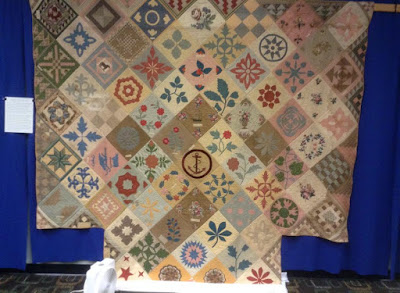 Below, an 1840's (with some fabrics that could date as early as 1820's)
potholder-style Signature quilt from the Bristol, Maine area (coast). Each block is individually pieced ( or appliqued), quilted and bound before being tightly whipstitched to the others to create the quilt.  In this quilt, 40 little "quiltlets" were made to become the whole!!!  An ingenius method so that many ladies could work on their own time toward the end result. 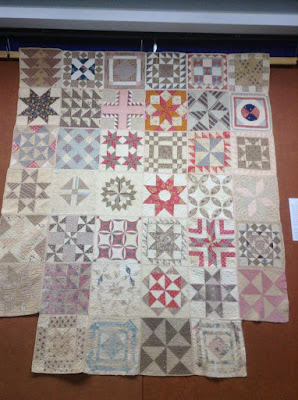