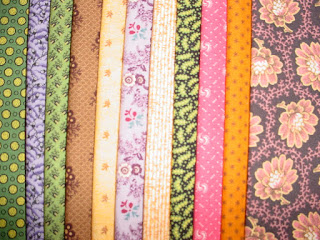 New fabrics received recently.....eight bolts of "New Colonies" (1830-1890) seems later than "Colonial America" but whatever!  The three on the far right are from Paula Barnes.  Oh wait, that's wrong!  The brown (fourth from left) and the pink and the cheddar are Paula's........I did not lay them out right! 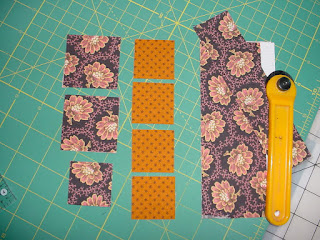 This is how I cut 3" Shoofly blocks from 6" squares.  Ideally, I like to cut a 6" strip off my fabrics and then cut 2 six-inch squares from the selvage end for my "Scrap Box" because when I am ready to make scrappy blocks, I don't want to handle Yardage......just small pieces!!  Don't ask how far behind I am in this task!  The two 2" squares (lt and dk fabrics are layered and cut together)
at the upper left will become the four HST's.  The four cheddar 1-1/2" squares will be background and one 1-1/2" square will be cut from the dark floral for the Center.  You can actually get two Shoofly blocks from a pair of 6" squares.........or, you can make one positive block and one negative block!  I want only one so the rest of the fabric will go into the box for my 3-3/4" log cabin blocks....will talk about those soon!  And don't forget one for the Postage Stamp box!  Now that I have stated that I cut a 6" strip, I need to tell you that I recently started cutting 6-1/2" strips as I sometimes could not get the four 1-1/2" squares from one strip. 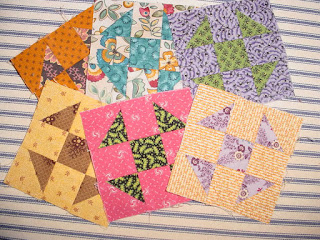 And here are six new Shoofly blocks from the new fabrics (plus one Orphan!)  Next time I make blocks I need to find more browns.....don't want the quilt to be too bright.....just "sparkle" here and there!  My quilt will need 576 blocks for a 72" x 72" quilt but only Half will be Shoofly blocks.....the other half will be unpieced squares of many different fabrics........expect a very busy quilt!!   Have 61 blocks so far......227 more to make but I am not going to spend much time thinking about that right now!! 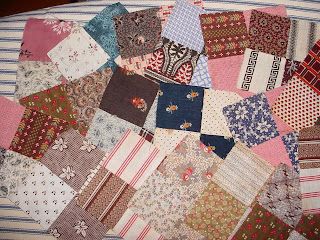 Have been going through a couple boxes of old fabrics and quilt blocks (looking for one particular thing.....but it is always fun to renew my acquaintance with these treasures every now and then!).  These are 4 patches that I may use for a small quilt, or maybe I'll just leave them as they are! 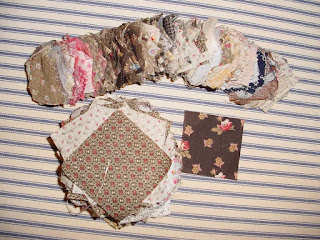 This was an interesting find that I will likely leave just the way it is.....tiny squares to make little four patches and larger squares to make them into Double Four Patch blocks.  The squares are neatly cut (but no rotary cutter in those days!) and then held together with a length of thread....you can see the length of thread across the top of the larger square.  The lovely little brown piece was an ophan I found in the box! 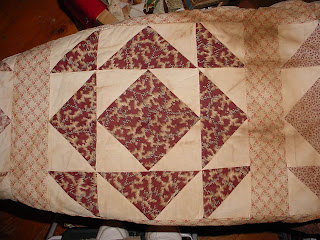 And lastly, would anyone know the name of this block?  I Think it (or a similar design) was recently discussed on one of the groups I am on but checking the older posts gave me no answers. The closest I could find in Barbara Brackman's book is #2039 "King's Crown" but it has plain corners and center (not pieced).  The fabrics in this old quilt top appear to be third quarter 19th century.
Posted by Cyndi at 4:41 PM